Lots of folks have weekend-long Memorial Day celebrations, but that hasn't been our style. We have occasionally been invited to a large party at friends' houses, and we've even hosted a small intimate party at the lake. But generally speaking we have a pretty low-key Memorial Day. 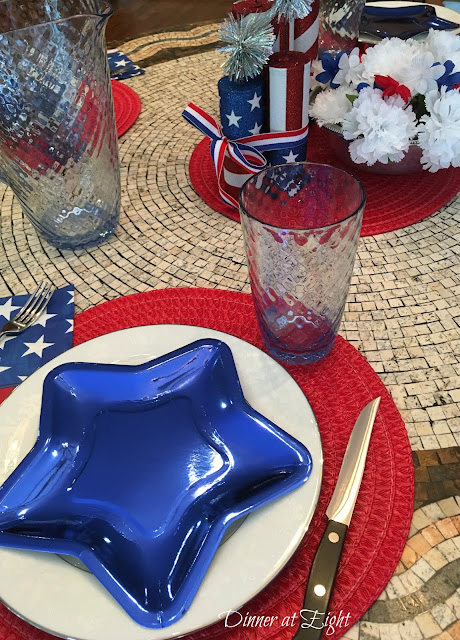 This weekend I think I'll re-create the relaxed table I set last May but never got around to posting on the blog.


It will just be the three of us, or perhaps a fourth if Miss J invites one of her friends. As a base I used simple red placemats underneath the centerpiece as well as the plates. These were topped by bright white dinner plates (Noritake 'Ranier') and deep blue star-shaped plates for the watermelon/fruit salad. Although the star plates are paper, they shine as though they're fine porcelain! 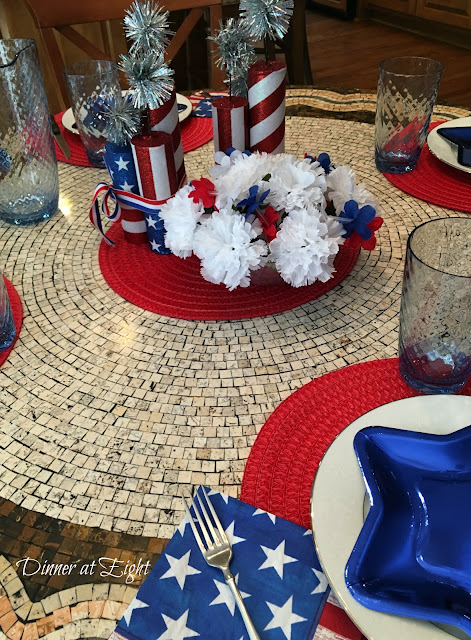 Stars are repeated in paper napkins. (Because they're easy and steaks and corn on the cob cooked on the grill -- not to mention watermelon -- can get messy, requiring lots of napkins, lol!) The care-free acrylic pitcher and glasses can easily move outside if the weather permits. 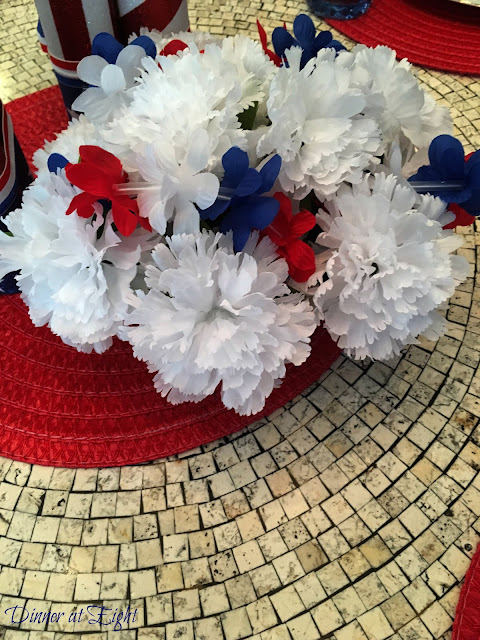 I gathered white carnations woven with a red and blue garland in a vintage aluminum bowl. Sparklers set in faux candles are tied with vibrant striped bows. Together they make a centerpiece that follows the rule-of-three. 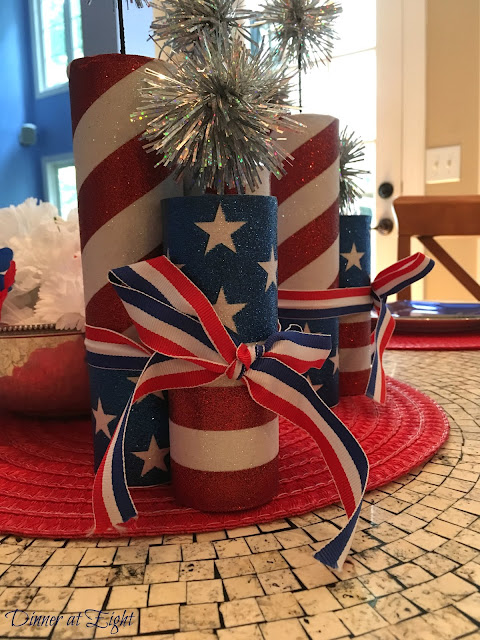 The effect is festive and casual, 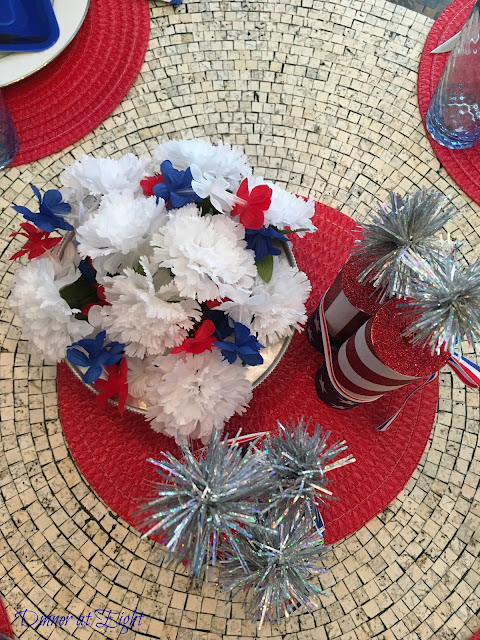 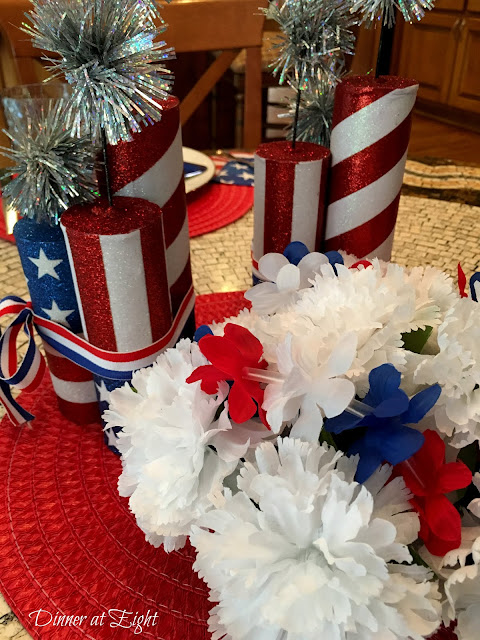 I used flowers to honor the beginnings of Memorial Day in 1868. Originally known as Decoration Day, it was a somber day of remembrance of those who fought and died in the Civil War.


"The 30th of May, 1868, is designated for the purpose of strewing with flowers, or otherwise decorating the graves of comrades who died in defense of their country during the late rebellion, and whose bodies now lie in almost every city, village and hamlet churchyard in the land."
General John A. Logan 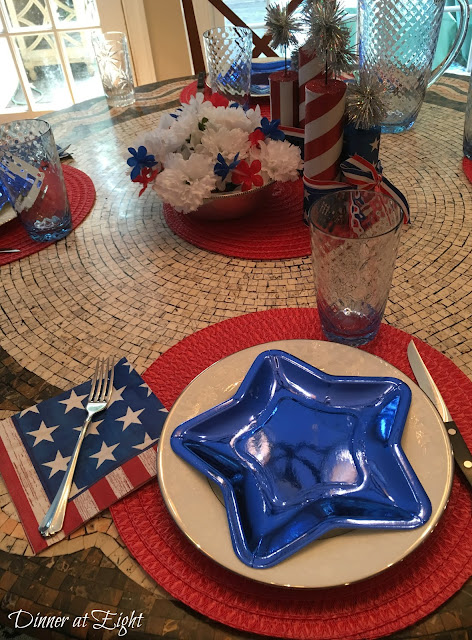 After World War I, the holiday evolved to commemorate American military personnel who died in all wars. The name changed to Memorial Day but continued to be celebrated on May 30. Over time, the holiday came to celebrate the beginning of summer as well. In 1971, Memorial Day became a federal holiday and was established as the last Monday in May. 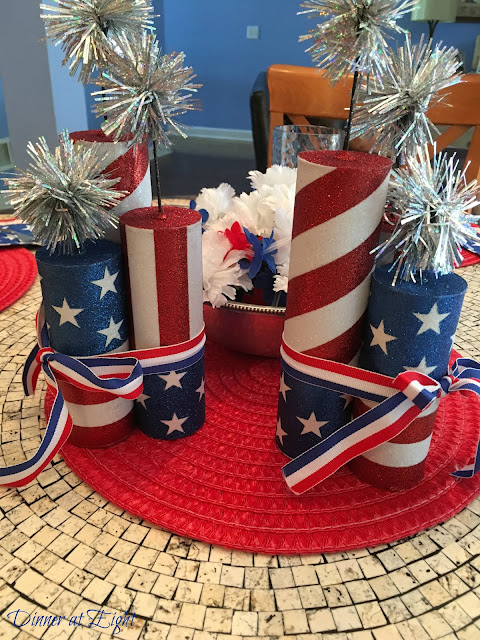 A similarly relaxed table can be found at A Casual Fourth of July. However you celebrate, I hope you find inspiration to create an enjoyable Memorial Day and take a moment for remembrance.

Thank you for visiting! I appreciate your thoughtful comments and I enjoy reading every one so much!

Sandra
Welcome to Dinner at Eight, a blog about my home, tablescapes, gardens and adventures. I love mixing beautiful colors and exquisite craftsmanship, and enjoy adding the unexpected to the ordinary! I have a wonderful husband and daughter, and delightful furry ones. I love sharing my ideas with you and hope that you find lots of inspiration for your home!

Sign up for emails to stay up to date 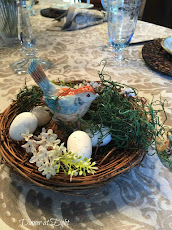 Spring Table with Azaleas and Birds 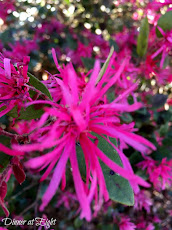 Early Spring Flowers in the Garden 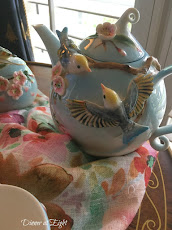 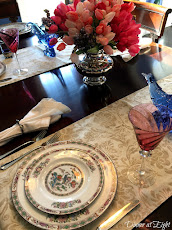 In Celebration of Cranes 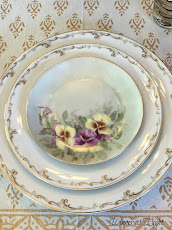 Setting a Spring Table for Lunch