Puppy Challenges in the Garden

Meet Finnegan, mischief maker!
We brought him home in April at eight weeks old, the cutest bundle of fur, with curiosity in his eyes!
As puppies do, he investigates everything with his mouth. Things allowed (food, toys, treats, big brother Jake, mom and dad) and those things not allowed (everything else!).
When we first took him outside, he discovered that a big world was out the door — and that there were a million things to pick up, tear, chase and chomp. Chomping on everything in the grass, along the path, in the planting beds! Now four months old, he has put more things in his mouth that Joey or Jake ever did in their stints as puppies. 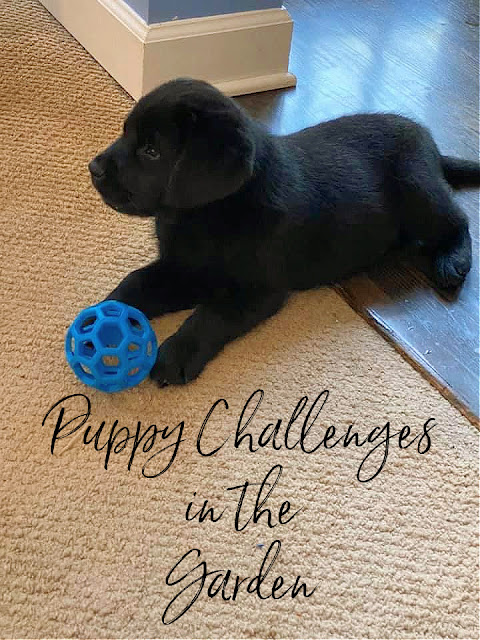 Since I had not yet begun to install plants in our re-designed back yard, I decided to go with plants that were puppy-safe.
I soon learned that was easier said than done. There are a lot of ornamental/landscaping trees, shrubs and flowers that are toxic when ingested by dogs. Unfortunately for me, that included many of my favorites — tulips, daffodils, hostas, hydrangeas, azaleas, the list goes on. Levels of toxicity can vary from mild tummy upsets to neurological damage and death. Toxicity also depends on factors related to the individual dog, such as age, weight, and amount of material ingested. For some plants it also depends on whether the part consumed is leaf, stem or root, and whether it is actually eaten or only tasted. I had only worried before about the most toxic plants for our other dogs, but with Finn I was concerned with any and all potential sources.
The challenge was on!
Shown below are the plants I've started with. I'm happy to say that I am able to use pentas (Pentas lanceolata) and Persian shield (Strobilanthes dyerianus) in the containers on the deck. Both are annuals in my Zone 7 garden. 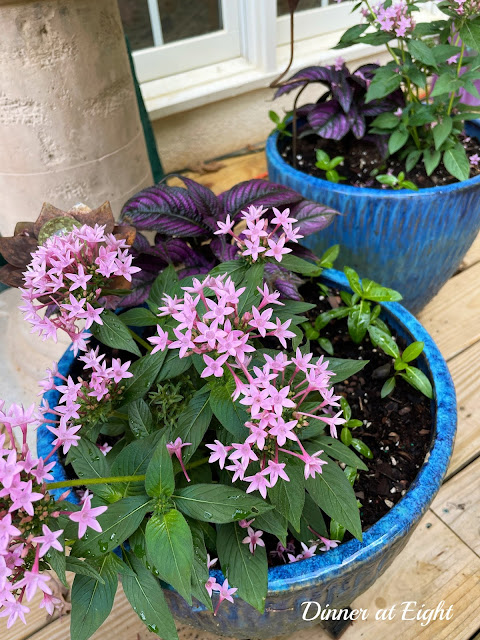 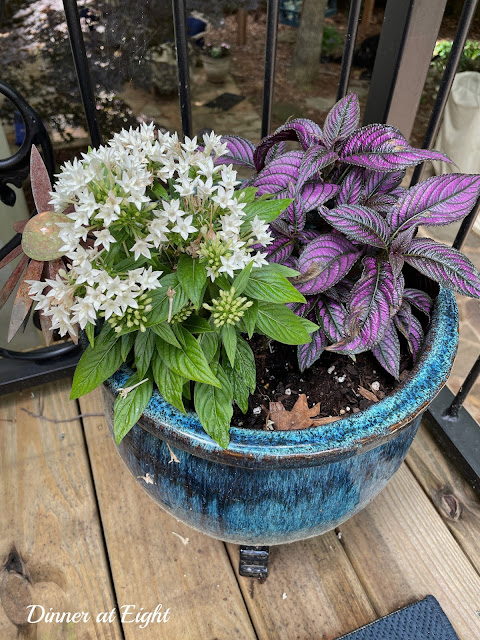 Most, but not all, succulents are safe. Mine are located on tables and on the etagere. Most cacti are not safe, for the spines alone if nothing else. 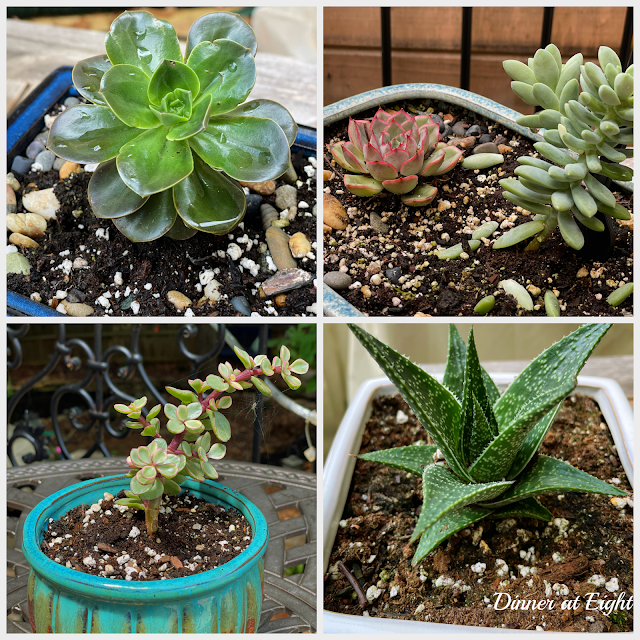 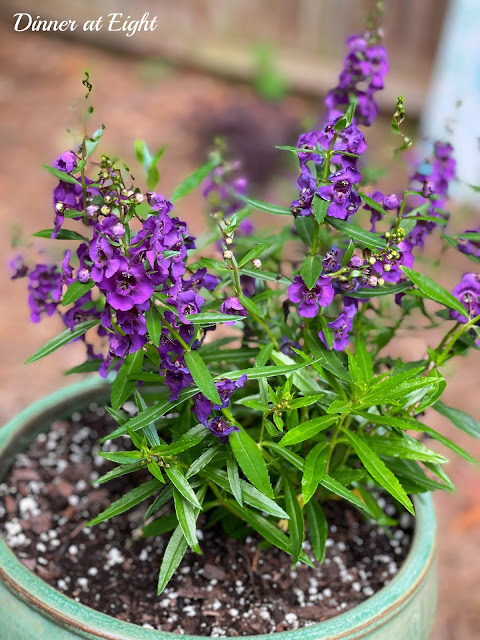 Still in the sunny part of the garden, there are pentas of another color and delightully tricolored snow-n-summer asiatic jasmine (Trachelospermum asiaticum 'hosns'), with leaves of pink that turn white, then mottled and finally green. 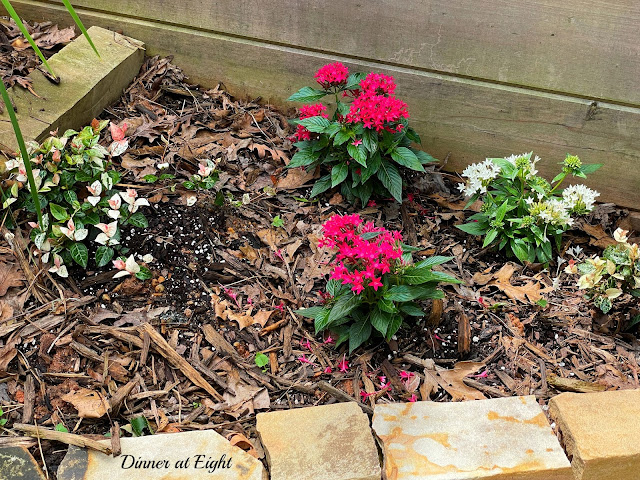 And dependable petunias (Petunia spp.), which bring color and life to the wall and steps. 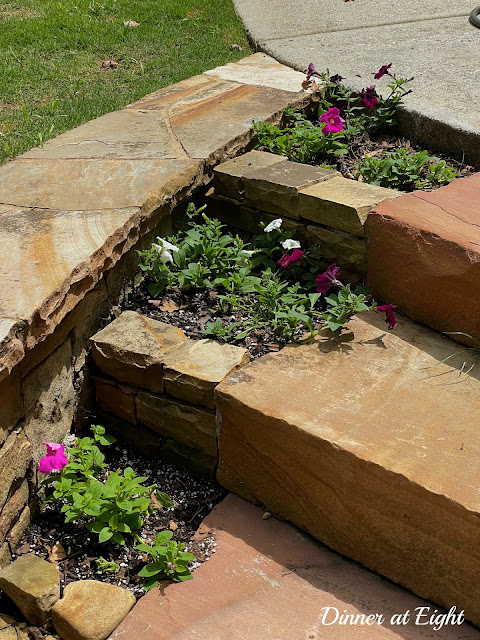 For the structure of the garden and to add plenty of interest, I planted a variegated redbud (Cercis canadensis 'Alley Cat'), 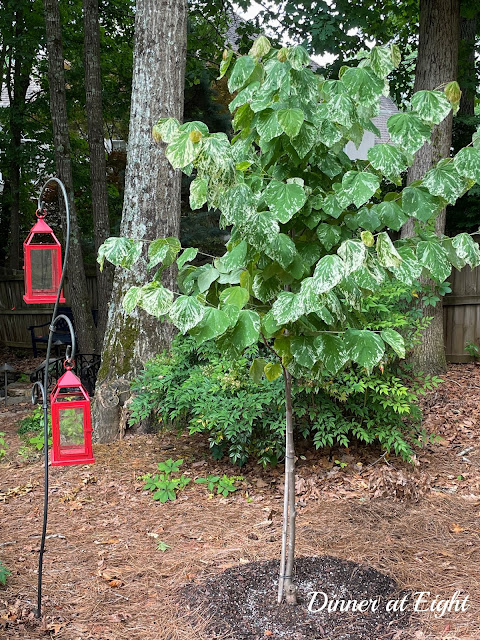 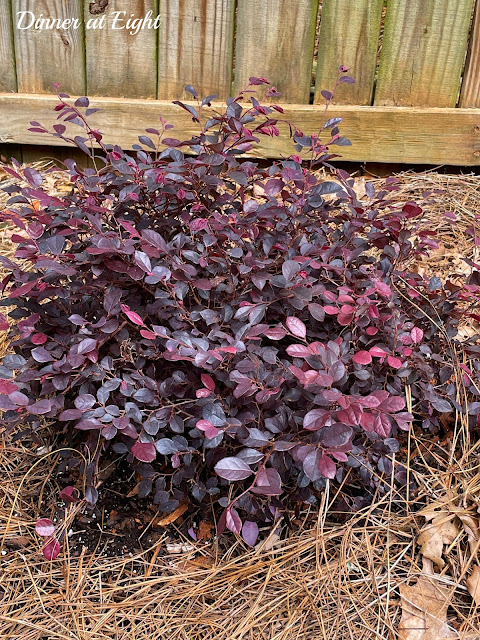 a well-loved shrub remembered from my parents' home (Weigela florida 'Sonic Bloom'), and 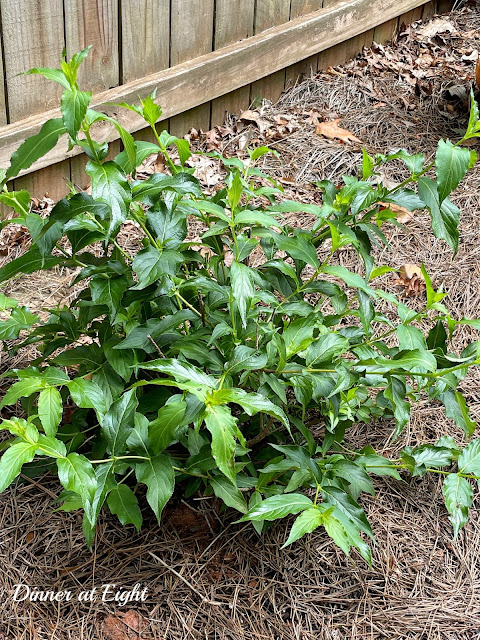 a Japanese maple (Acer palmatum '​Sango-kaku'), which will hopefully distract from the view of the neighbor's driveway as it grows. 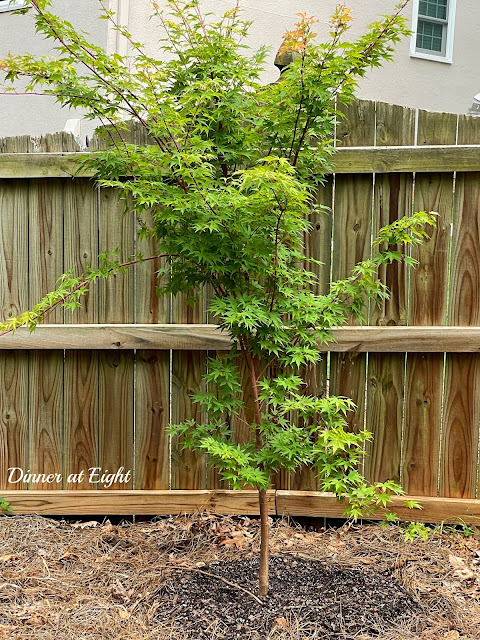 At this stage Finn was small enough to fit between the vertical components of the metal fence, so he didn't venture outside without his leash in order to prevent him eating who-knows-what. 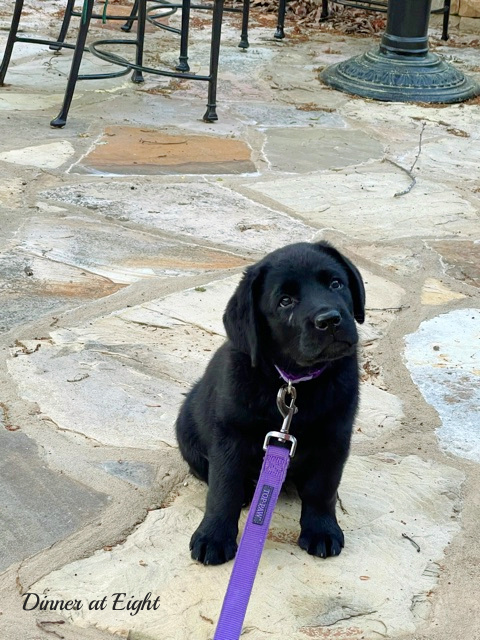 You may remember from part 2 of the renovation that most of the backyard is shaded, increasing the complexity of finding puppy-safe landscape plants. A smaller coral-bark maple was tucked between the house and the middle patio. 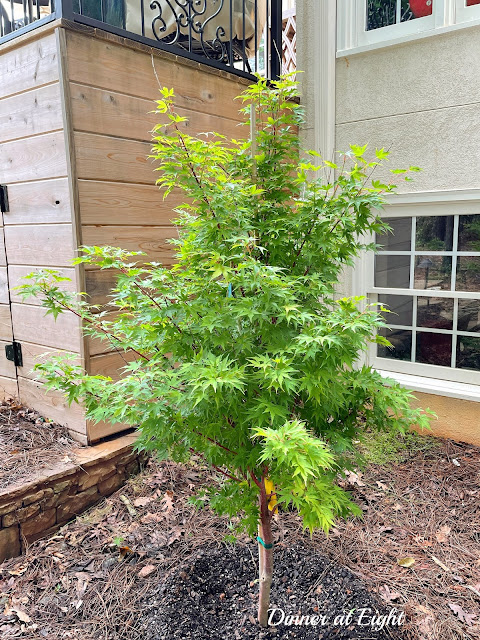 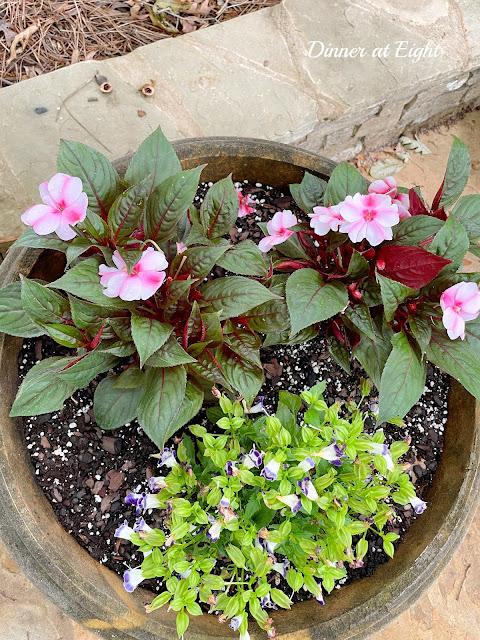 Along the stream I wanted a lush woodland feel. Since hostas are out, I planted ten ferns of various sizes and shapes. Until they get a bit larger I won't remember which are which! 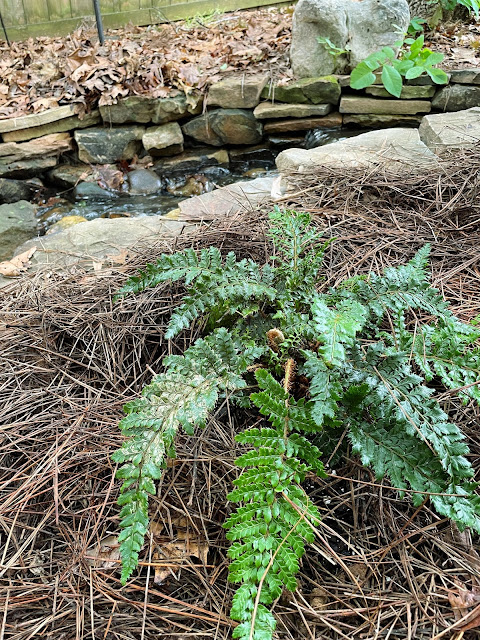 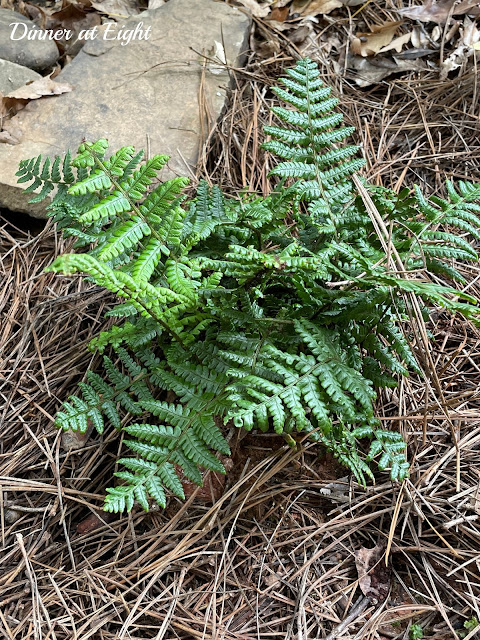 I also placed two evergreens (Cedrus deodara 'Prostrate Beauty') in a lovely blue-green, that will spread and drape gracefully over the stream. 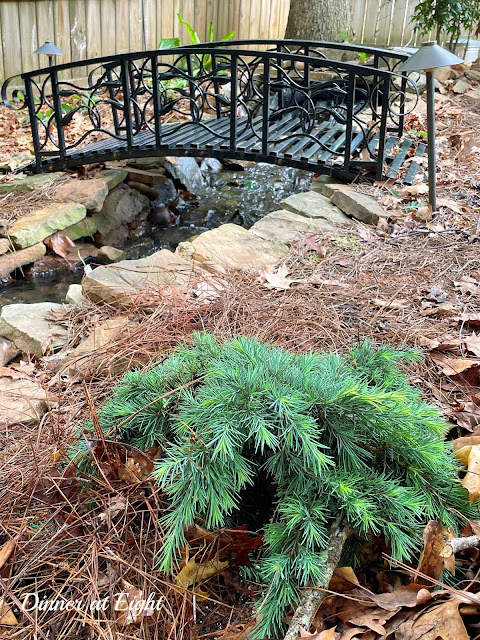 Last but not least are two southern staples — camellias, which will bloom profusely during the winter months. One is behind the grill center (Camellia hiemalis 'Chansonette' pictured here), and the other (Camellia x vernalis 'Egao Corkscrew') is next to the pergola. Until they flower, they'll look pretty much alike. 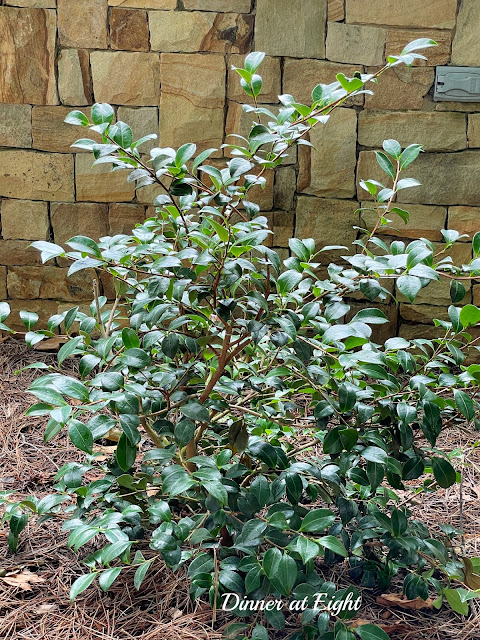 Finn adores big brother Jake, and does everything Jake does. Ten-year-old Jake for his part tolerates all kinds of puppy behavior! I haven't yet told you that our yellow lab Joey passed away last fall at 15 ½. Jake had been despondent since then, but has regained his sense of fun with Finn. 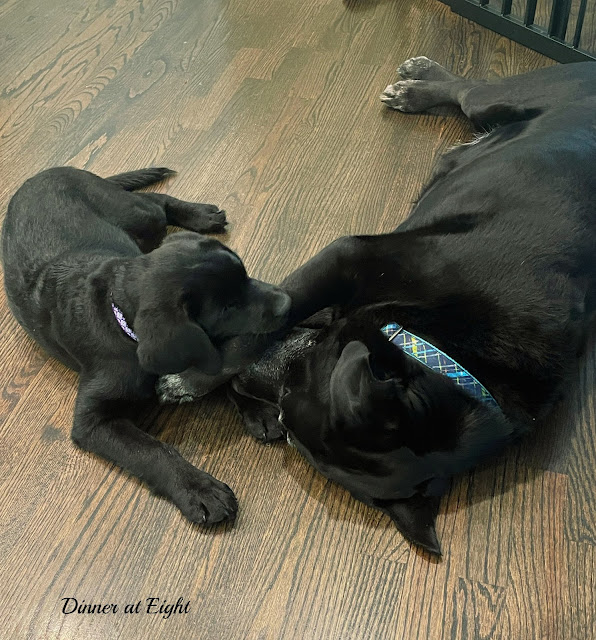 I hope that my search thus far for puppy-safe landscape plants will inspire you.
For a list of common landscape items, both toxic and non-toxic, you may want to see the ASPCA's list for dogs. There are many other sources as well, some of which focus on specific states.
Posted by Sandra at 12:35 PM 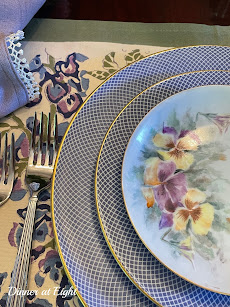 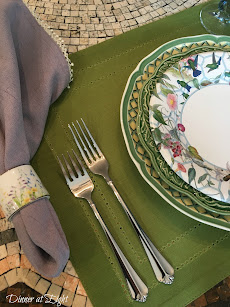 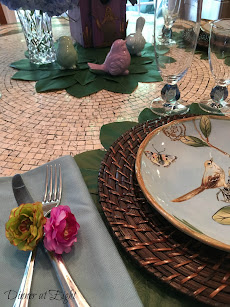 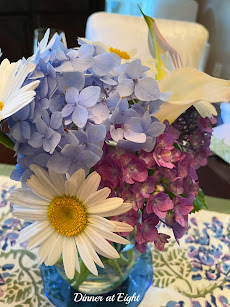 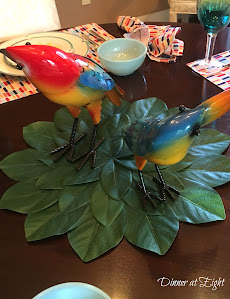