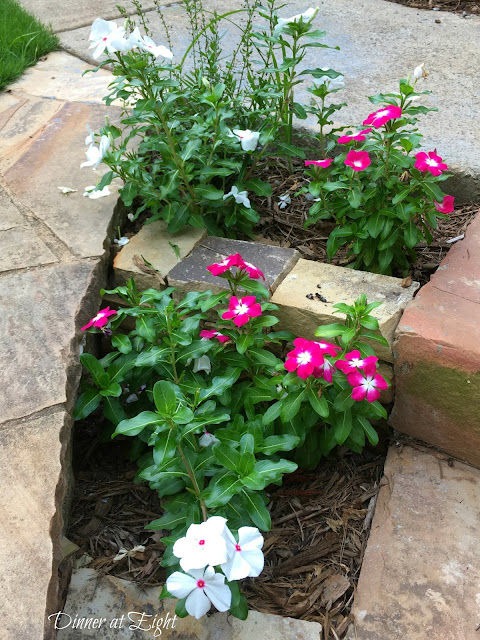 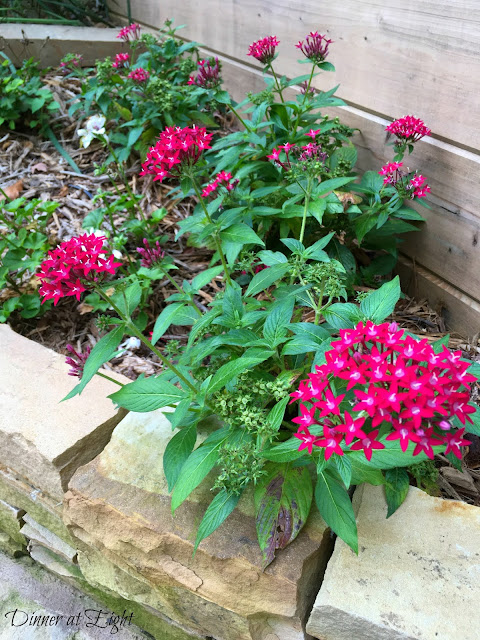 The top of the yard had nine huge Leyland cypresses which covered most of this area down to the stone wall. The cypresses were browning, succumbing to disease. This is the only part of the backyard which receives sun for more than two hours a day. We've replaced the cypresses with five arborvitae (which won't grow nearly as large) and a nice swath of grass that the furry ones are particularly pleased with! 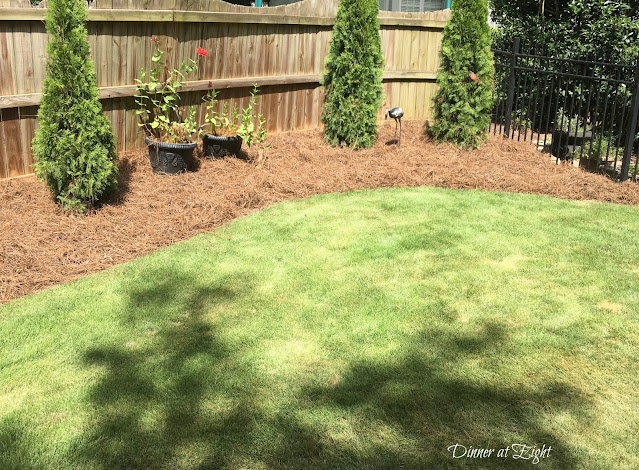 To the left is the the flagstone patio which was dug out and then relaid on a concrete base. We extended the existing stone wall to meet the grill, but built lower so that it can provide additional seating. We also installed drains to take care of the runoff issues. 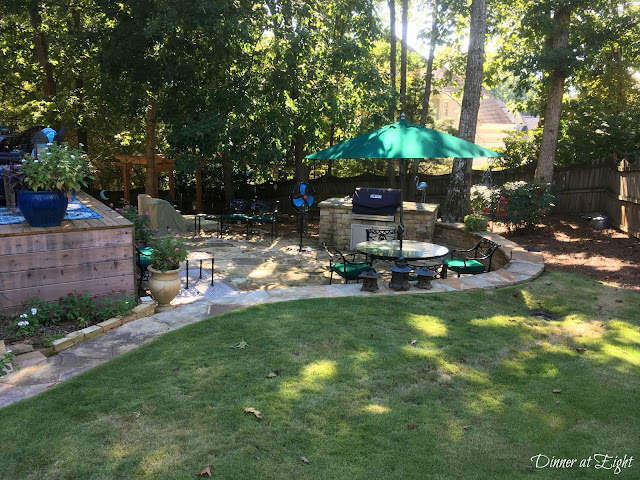 I've had this cast aluminum dining set at least thirty years. It was a lovely verdigris when I bought it. Greg and Miss J then painted the set a silvery gray/green about ten years ago. It was due for a refresh, so we had it powder coated a glossy black. Next year I'd like to replace the forest green umbrella and cushions with something else. 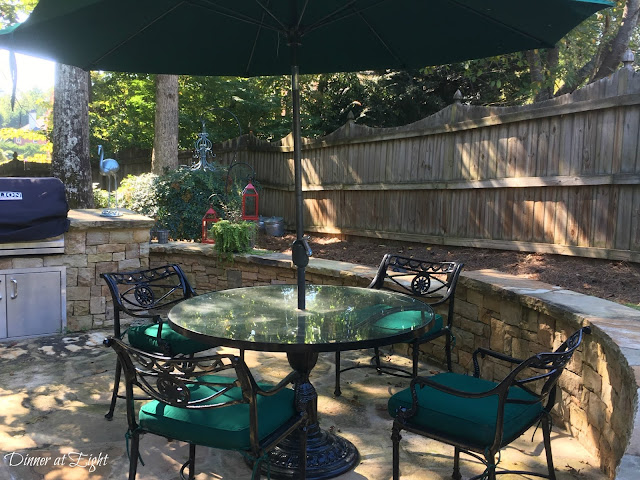 Between contractors, Greg painted the lanterns and chandelier. We haven't decided on the permanent placement for the chandelier. 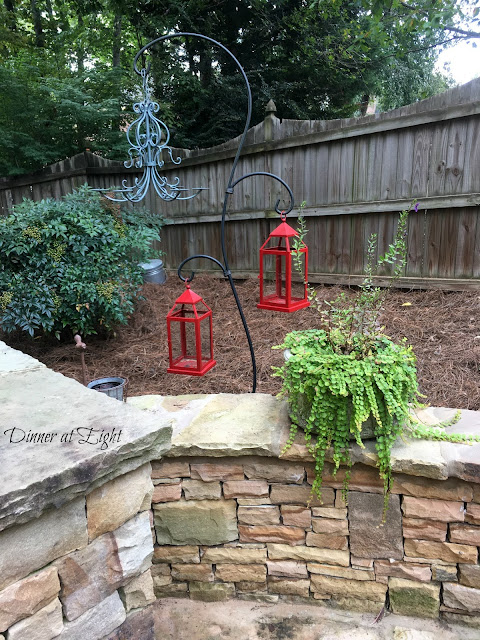 Below the new deck where shrubs used to be is a great place for a bench and plant-filled containers. The deck extends two feet farther than before which allowed us to create a sitting area on one side and a small dining area for two on the other. We also relocated the stairs from the side to the back and made them wider. To the left is a matching enclosure to house garden tools, etc. 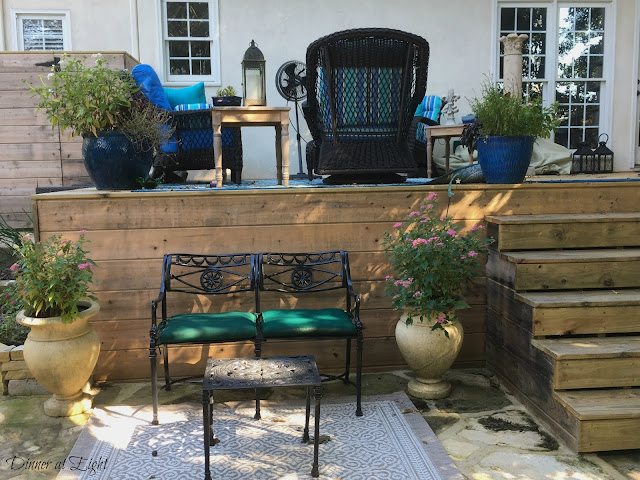 The deck furniture is six or seven years old, still with the original cushions. We leave the furniture and cushions out year round, covering them in the rain and during the winter. 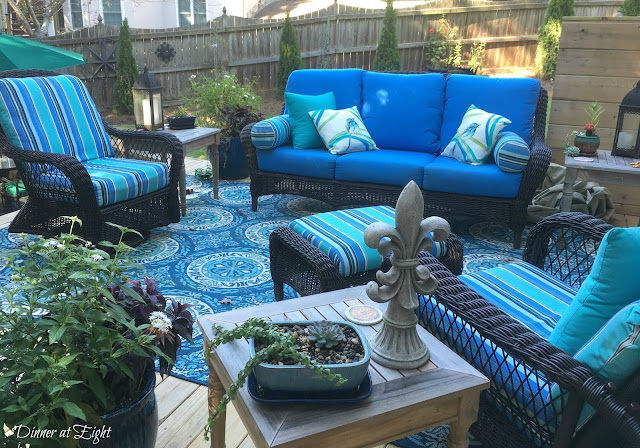 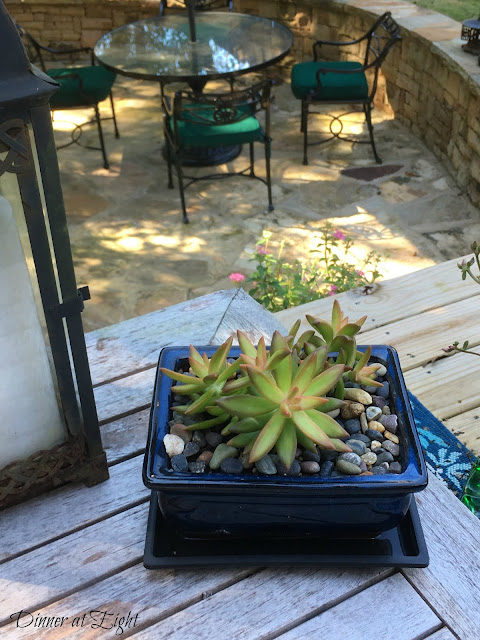 I was relieved that the deck was the first to be completed so that we were able to spend evenings out here throughout the summer as we sheltered at home. During the time we've lived here, we had discussed adding a roof to the deck, but decided we no longer needed it for shade. 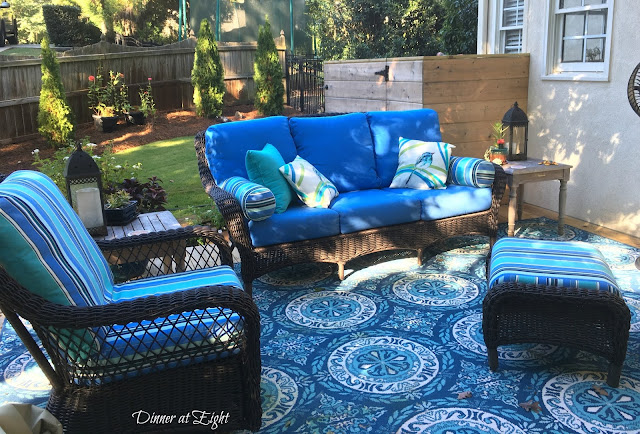 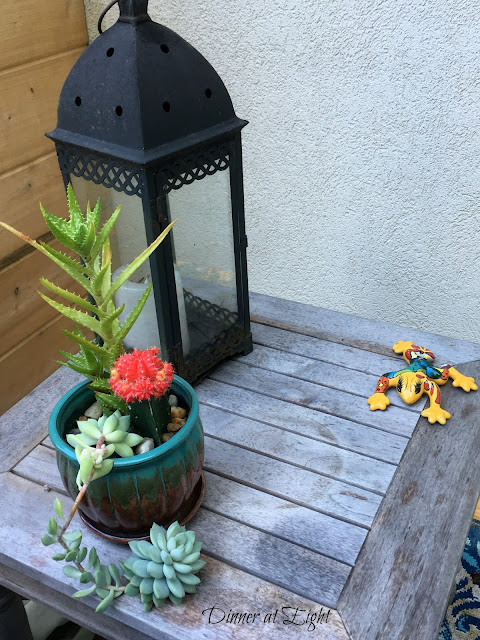 The opposite corner hosts the bistro table and chairs. You may remember them from Lunch on the New Bistro Table and Dining Alfresco with Lemon and Lime. 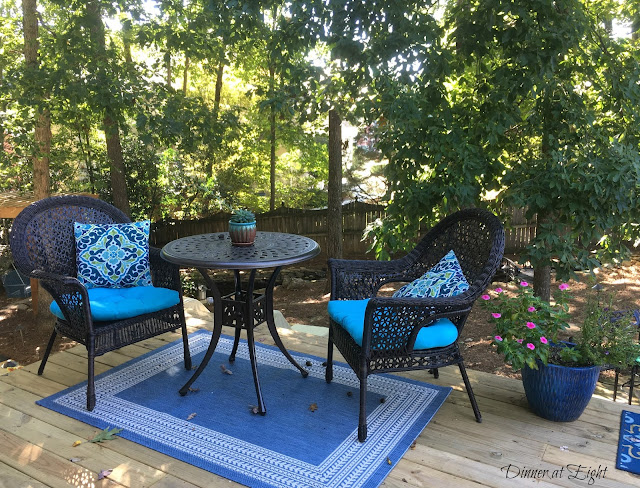 Somehow all the changes have made the upper yard seem bigger! 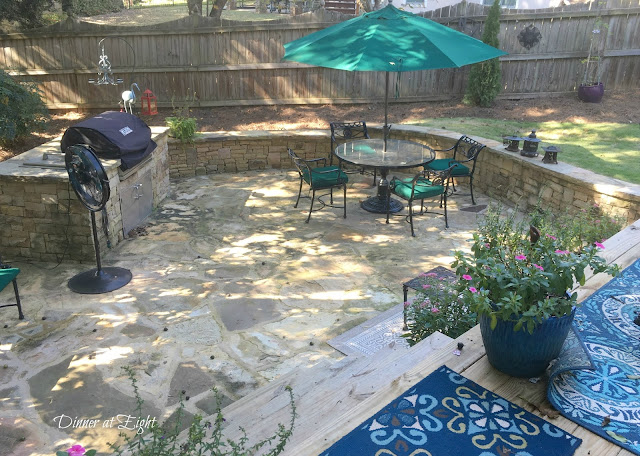 Oaks, maples, hickories, and dogwoods provide shade most of the day, which is definitely welcome as the backyard is on the western side of the house. Sadly we had two lovely copper beeches that didn't survive the encroaching shade from the larger trees. 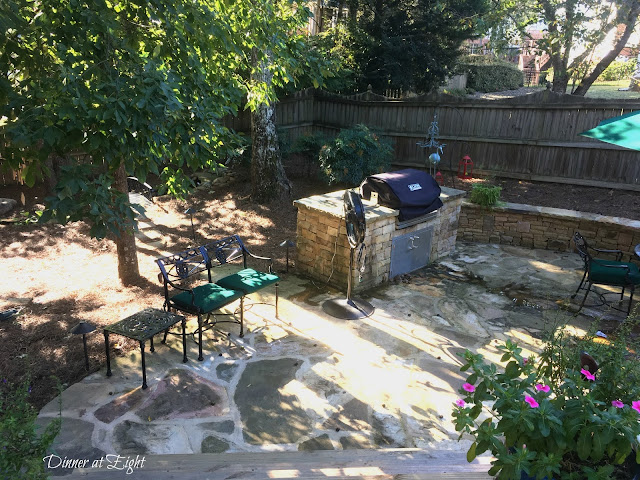 From the patio, a path leads to the stream and bridge, which was also powder coated glossy black. 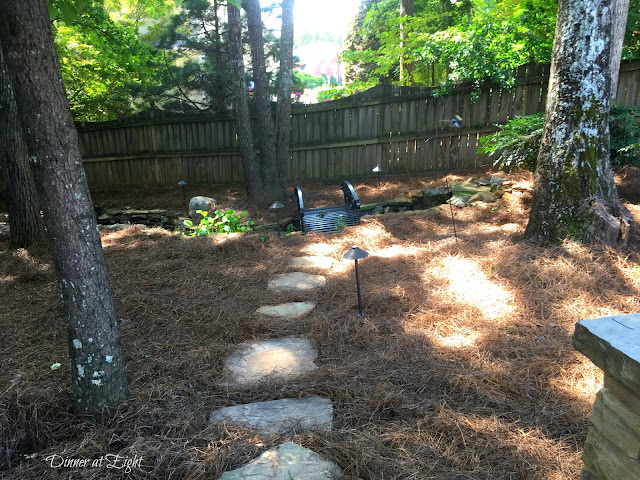 About fifteen years ago we had dug a pond next to the house with a stream to feed it. This year we re-oriented the stream closer to the fence and moved the pond as well. Our contractor reused the stones and rocks, many of which are covered in moss. 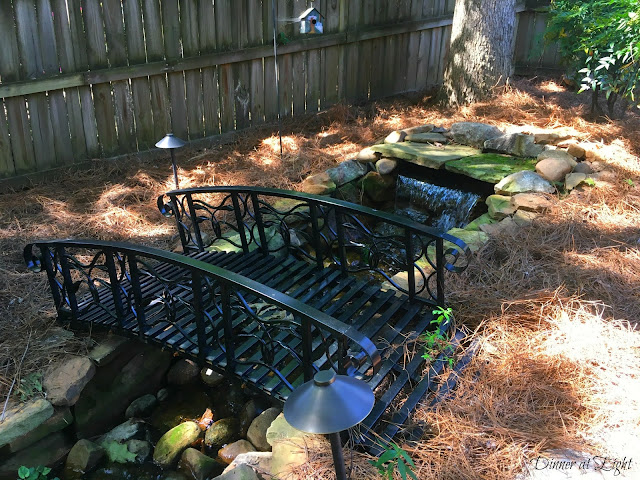 Crossing the bridge leads you to a comfortable bench. Which you will see in Part 2! 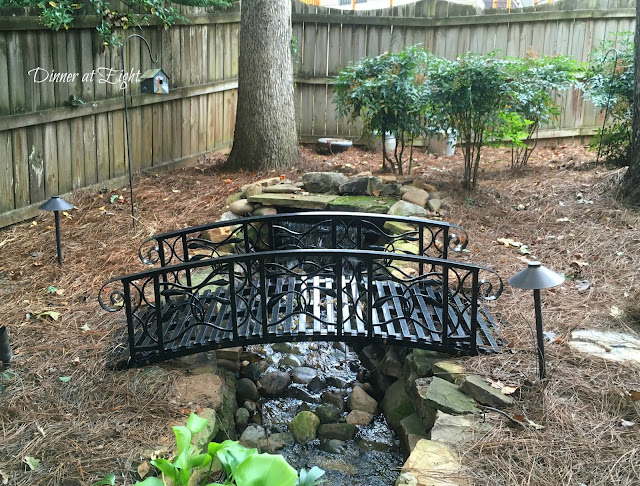 I can't wait to begin planting shrubs, perennials and bulbs! November through March are the best times to plant here, so they get a head start before the heat and humidity sets in.
Thanks for joining me on this tour! 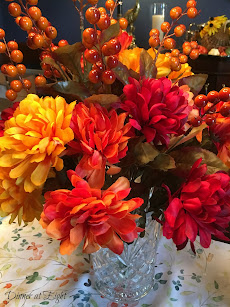 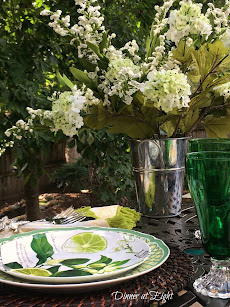 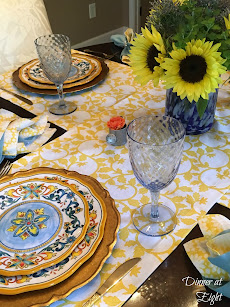 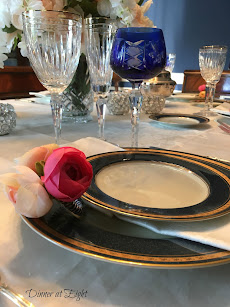 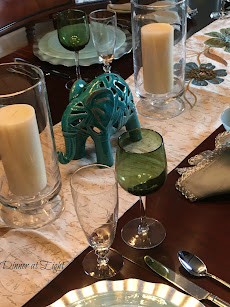